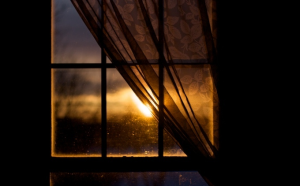 If one word could be used to describe Eos’ childhood home, it was colourful.

The life of the house filled your lungs from the first step onto the front lawn. Where the neighbours had simple, matching green lawns, there was no grass upon his. Instead, every inch from the sidewalk to the front door was an abundance of flowers, herbs and trees. A large willow tree sheltered the flowers from above, the slightest breeze setting the vines fluttering. Lush flowers, varying in colours, sizes and types grew together in thick beds. Their sweet smell swirled and floated around, enticing all forms of life from bees to birds. Stone slabs invited guests to the front door where a cheery doormat wished them a good day.

Inside was no disappointment to the natural flavour of first impressions. There were plants in great abundance anywhere you looked, giving the building a true feeling of comfort and life. No blinds or curtains were ever drawn over the windows and instead the home was flooded with brilliant light every day. The furniture was simple, nothing extravagant or gaudy. Most everything was made of wood and the cushions were a plain, bright colour varying from basic whites to rich reds.

The air was ambrosial. A lush, natural atmosphere of plant life.

It was the scent that had long since etched itself into Eos’ clothes and things. It had become apart of his every day life.

There was a short knock on his bedroom door and a melodic voice carried through the wood. “Wake up, butterfly. Breakfast will be ready shortly.”

Humming from under the burrows of his blankets, a head popped out with a slurred, “Okay, mum.”

There were light footsteps that faded from his door as Eos pulled back his covers. He’d sat up with a sleepy stare and rubbed at his bright teal eyes as they struggled to focus in the early morning light. His blond hair, a soft pale shade, had stuck up in several directions in the usual morning chaos. His gaze had been blank as he looked forward, slowly turning his head to peer out the window. The sunrise had been beautiful that day, a warm glow of pink and orange that gave the homes surrounding theirs a vibrant shine. A small smile pulled onto his lips.

What a beautiful day, he had thought.

A few minutes later, he padded down the stairs with a yawn and made his way into the kitchen. The smell of pancakes filled his nose and he could hear the gentle sizzle of the frying pan. Upon entering the room, his mother turned around and gave him a soft smile. Her hair was long, dyed in several stripes of colour that matched well to the pale blond she’d passed down to Eos. Many thin braids lined the expanse of it but for the moment, as she cooked, it was pulled back neatly with a blue ribbon. Her face was gentle, showing signs of age along the creases of her lips and eyes but there was nothing that gave way to the stresses of age. There was peace, even in the dark brown of her eyes. An apron was pulled around her waist in security but she still adorned her usual pajamas of sweatpants and a tshirt.

Eos nodded softly, moving over to the counter and plucking a raspberry from a bowl she had already set out. “I did.” He sppken before popping it into his mouth.

“Any dreams?” She asked, turning back to the frying pan and flipping a pancake.

Wandering over, Eos pulled out a bar stool from the counter and took a seat, claiming himself another raspberry before speaking, “Nothing I can remember.”

She chuckled. “Not dreaming of sparrows again?” She glanced at him from the corner of her eye as a dark pink filled Eos’ cheeks. Her smile widened. “I thought as much.”

“It’s nothing.” He mumbled, deciding to occupy his lips with a strawberry this time. It was larger and a means of avoiding the impending statement for a few seconds longer.

“Come now.” She smiled, lifting the pancake from the frying pan and setting it onto an already grown stack. Clicking off the stove, she had set the pan aside and removed her apron. “There’s nothing to be ashamed of. You’re already 13; plenty old enough to be developing such feelings.”

Eos watched her hang the apron but decided to hold his tongue on the matter. His gaze flicked down as he tried to avoid the topic. She chuckled once again, sliding the plate of pancakes over to him and moving around the counter to sit next to him. “It’s the first day of summer vacation; your sparrow should be flying home today, correct?”

“… Last night.” He replied, picking up his fork and claiming two pancakes onto his own plate. The colour had yet to leave his cheeks. “He was playing last night.”

A knowing smile tugged at her lips, nudging the honey toward him and picking up the bowl of berries for herself. “He plays the violin, yes? I would love to hear it. You should invite him over.”

“He’s probably tired.” Eos replied simply, picking up the bottle and pouring a generous amount over his pancakes.

“That’s hardly an excuse. I’m certain that seeing you would be a welcome sight.” She replied, holding her hand out for the honey. Eos passed it to her, taking the bowl of berries and littering his pancakes with them. “You could bring him some banana muffins.”

“… You think?” He questioned, looking a little uncertain.

“You were born to bring light into this world, butterfly.” She brushed her fingers at his hair, tucking a strand behind his ear affectionately. “Follow your heart. Your sparrow is a gentle spirit.”

Eos looked over to her, a hopeful expression filling his entire face.

She withdrew her hand and smiled. “Just remember to respect yourself and your own boundaries. Your safety and happiness should always be your largest priority. Don’t hide your light with fear of the unknown.”

She turned toward her breakfast and Eos chanced a look out the front window. The house across the street looked quiet in the early morning hours and he felt his heart speed up. Banana muffins, huh?

A soft chime from his plate pulls his attention and his mother points at it with her own fork. “But breakfast first, butterfly. You can visit after our morning meditation.”

“Yes, mum.” He replied, digging into his pancakes. His mind, however, was elsewhere. He wondered about what he should wear. Would the banana muffins be too sweet for him? Maybe he should bring something else. He supposed he shouldn’t go over too early; he would still be sleeping at this hour.

Before he knew it, his plate was devoid of breakfast and suddenly his optimism was unrivaled.

His previous thought was surely to be confirmed now.

It was going to be a truly beautiful day.